Paddy Power are known for their publicity stunts (shawnwilliams4433 / Bigstockphoto.com)

Bookmakers want your money. They can dress it up as much as they want, but that is their raison d’être. The more customers they have, the more money they’re able to make. As a result, bookies are constantly looking for clever ways of getting their name out there. Most of them will do small PR stunts, such as paying out early on a team to win something, but we’re talking here about the bigger, more spectacular things that were done with the specific aim of earning some newspaper column inches and the free publicity linked to that.

As anyone that has been paying attention over the past few years might imagine, few bookmakers are as good at this as Paddy Power. The Irish bookie has made a name for itself by often pulling off outrageous stunts that amused and entertained. They aren’t the only ones that have tried their hands at it over the years, however. Bookmakers know that if they can be more visible then they’ll win more customers, which will earn them more money in the long run. Here is a look at some of the maddest PR stunts that bookies have done over the years.

In case of Emergency at Old Trafford, Break Glass… pic.twitter.com/UWdkXX084w

Even rival supporters have to give Alex Ferguson credit for what he achieved at Manchester United. The Scottish manager had a middling career as a footballer before Turing his hand to management, earning his spot at Old Trafford thanks wins in the Scottish Premier Division, the Scottish Cup, the Scottish League Cup, the European Cup Winners’ Cup and the European Super Cup. He was famously close to being sacked by the Manchester United hierarchy, but turned things around and made the Red Devils one of the most successful clubs in the world.

His stint in the Old Trafford hot-seat saw the club win 13 Premier League titles, five FA Cups, four League Cups and two Champions Leagues, in amongst other trophies. Indeed, one of the few criticisms that could be levelled at Ferguson is the fact that he left the club in a poor state for the manager that came after him. Whilst he might have implored the fans to give David Moyes their full support, the state of the playing squad and the backroom team that he left his fellow squad were nothing that anyone would get very excited about.

It was little surprise when Moyes’ United career started poorly, with supporters soon ignoring Ferguson’s wishes and turning on him. Paddy Power saw that as an opportunity to get their name in the paper, so they installed a box outside of Old Trafford with a statue that looked remarkably like Alex Ferguson. It was adorned with the simple message, “In Case of Emergency Break Glass.” Interestingly, the glass was never broken, but David Moyes didn’t last a full season regardless and was soon replaced by Ryan Giggs as a caretaker until the end of the season.

Ladbrokes Offering Students the Chance to Bet on Their Own Degree 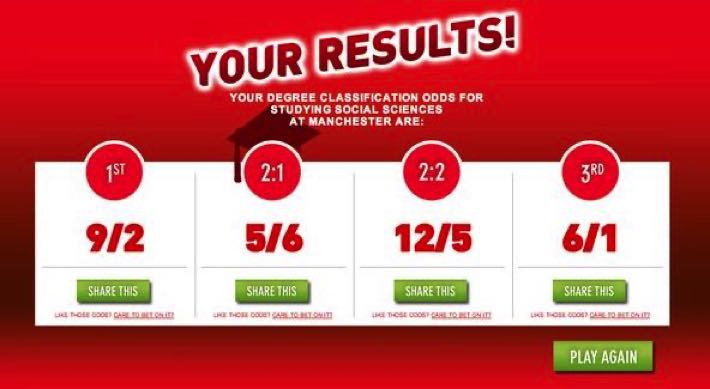 Sometimes a public relations stunt from a gambling company makes the news because it is funny or captures the imagination, which is what Paddy Power have been able to pull off time and time again. Sometimes, though, a stunt makes the papers for all of the wrong reasons, such as when Ladbrokes were accused of encouraging students to gamble on the back of their suggestion that students should bet on their own degree. The offer was for students at any of the top 20 universities in the country and had a £10 limit.

Using metrics, such as the university that students were due to attend, their A-level results and the degree subject they’d be studying, Ladbrokes were able to offer students odds on the various classifications that they could achieve. A student heading to Manchester University to study Economics, having achieved three As at A-level, would have been offered 9/1 that they’d get a First, 5/6 for a 2:1, 12/5 for a 2:2 and 6/1 for a Third. The fact that the highest degree certification and the lowest would have seen the students receive £60 in winnings suggests it wouldn’t be enough to pay for uni.

As you might imagine, Ladbrokes soon came under fire for the stunt. At the time, around 20% of students had said that they had turned to gambling to help pay for their time at university. A study by Leeds University showed that 60% of students had either gambled frequently themselves or else knew someone who had. At a time when students were clearly struggling with their relationship with gambling, the move from Labrokes to encourage it even further was seen as a poor one. It was a headline grabbing stunt, but for all of the wrong reasons.

If you mention poker to most people, they will think of chips being thrown into the middle of the table, cards being turned over one by one and players wearing sunglasses to hide their tell. Few people will think of dice, which are more commonly associated with a game, such as craps. Even so, it was decided that releasing two giant die from a helicopter and allowing them to roll down the side of a slope in Greenland would be a sensible way to launch Gnuf, a poker site belonging to the betting company Betway, back in 2007.

In one sense, it was certainly attention grabbing. Each dice weighed more than half a ton and was in excess of two metres tall, lifted above a mountain by a helicopter that was designed for extreme weather conditions. The slope was in Nuuk, Greenland and the stunt was filmed and broadcast online. The numbers that the die landed on were not shown, allowing people to bet on the outcome, which was announced a week after the fact. In the end, the die both landed on 1, meaning that it was one of the least popular roles in the casino: Snake Eyes.

Was the stunt successful? It is difficult to say with any degree of certainty, but the fact that Gnuf Poker is no longer operating probably tells its own story. Indeed, there are vast swathes of people that enjoy playing poker online but had never even heard of the site, so it’s probably fair to say that Snake Eyes was an appropriate roll for the company if nothing else. Labelled ‘The World’s Greatest Dice Roll’, the stunt was impressive to watch play out but failed in its main objective of bringing in enough customers to keep the site alive.

UEFA has strict rules in place when it comes to sponsorship, which essentially say that if the governing body doesn’t make any money from it then it isn’t allowed. Players are therefore not allowed to do anything that would see a company that has sponsored them gain publicity during a UEFA-organised event. Paddy Power never like to pay attention to such nonsense, of course, so the Irish bookmaker asked Danish forward Nicklas Bendtner to wear his ‘lucky pants’, which just so happened to bear their company name on the elastic band, and show them off if he scored during the 2014 Euros.

Those of a cruel disposition might well point out that the riskiest thing that Paddy Power did was depending on Bendtner to score a goal, given he only managed to find the net 24 times in 108 Premier League appearances for Arsenal. Score he did, however, and when he lifted up his shirt to show off his Paddy Power underpants, UEFA reacted strongly. Not only was Bendtner banned from taking part in the next Denmark match, he was also issued with a fine of £80,000, significantly more than had been issued for racist incidents around the time.

When Mario Balotelli was racially abused by Porto fans, UEFA fined Porto £16,700. Paddy Power quickly said that they would pay Bendtner’s fine and also pointed out the ludicrousness of UEFA thinking that some underpants were four times as bad as racism. This earned the bookmaker even more good publicity, showing that a well thought-out PR stunt could pay dividends. How much more money the Irish bookies will have earned thanks to the newspaper inches they received from it all than it cost them in the first place isn’t clear, but was probably a lot. 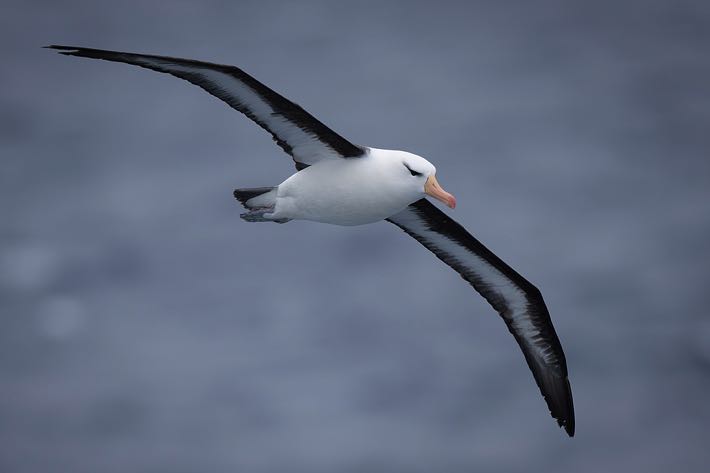 Not all of Ladbrokes’ PR stunts have been as poorly received as their attempts to get students to gamble. In 2004, the bookmaker followed up on an idea from the UK Conservation Foundation by asking customers to place bets on a group of albatrosses that were migrating from Tasmania to South Africa. The hope was that it would raise awareness of the plight of the albatross, with electronic tags added to 18 juvenile Tasmanian albatrosses, allowing both scientists and bettors to track their progress during the migration.

Any income generated from the bets was paid to further help with seabird conservation, meaning that Ladbrokes didn’t make any money from it. What they did get, though, was a wealth of publicity, thanks to the likes of the BBC publishing articles all about it. The Conservation Foundation said that the race between the big birds was akin to the Grand National, thanks to the length of the migration, the hurdles that needed to be overcome and the high profile backer that each bird would receive for the duration of the race.

In the end, the Tasmanian shy albatross named Aphrodite, which has been backed by Jerry Hall, defeated all of the others to claim the crown. The following year, the same thing was attempted but it wasn’t successful after all 17 birds went missing during the migration. By that point, of course, Ladbrokes had already done well out of the entire enterprise, appearing to be a bookmaker with a sense of responsibility. How many people that logged in to bet on the birds then bet on other things with the company isn’t clear, but it’s likely the bookie did well out of it all.

Faecal matter in your cappuccino? Not a problem. We’ve got you covered… pic.twitter.com/4n5seIW7dq

There are so many stunts that we could tell you about when it comes to Paddy Power. When Margaret Thatcher died in April of 2013, quickly followed by Alex Ferguson retiring as the manager of Manchester United, they put a billboard up in Liverpool saying, “Door Scouser Has One Wish Left,” offering the odds on Liverpool to win the league, for example. When England made to the European Championship in 2012, they put a large statue of ‘Roy The Redeemer’, which looked like manager Roy Hodgson, on the white cliffs of dover.

Yet few of their stunts over the years capture their ability to react smartly to news as what they did to Costa Coffee in the wake of a news report that claimed that ice from three of the country’s biggest coffee chains, including Costa, contained bacteria from faeces. The fact that the bookmaker happened to have a shop right next to a Costa helped, so they put up posters saying, “Don’t gamble next door. We won’t shit in your coffee,” alongside a picture of a coffee with a poo just above it to ram the point home.

It demonstrated just how quickly and cleverly the bookmaker is able to launch a PR stunt that takes advantage of the needs cycle, which they have done time and time again. Though the advert was in-store, it obviously gained attention and news reports which made the difference in terms of its purposes. It is the perfect distillation of what Paddy Power have been brilliant at over the years, which is making people laugh at the same time as making a wider point that the public can appreciate on different levels.