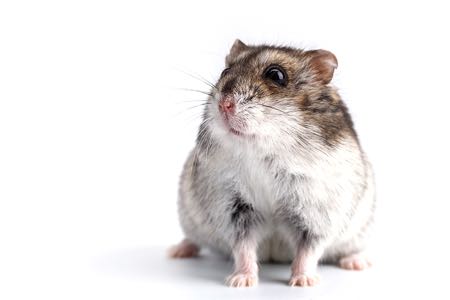 There is an occasional series of articles on this site about mad things that are raced for one reason or another. We have looked at both goat racing and ostrich racing, for example, exploring where they take place and how the races work. Now it turns out that there is also hamster racing, with one-time betting company Blue Square allowing punters to have a flutter on the outcome of the races between the ‘professional’ hamsters that were involved. It isn’t clear whether they had agents or how many of them turned to drink and drugs.

Blue Square weren’t the only bookmakers to offer bets on hamster racing, which was introduced in the United Kingdom in 2001 when an outbreak of foot-and-mouth meant that horse racing events were cancelled around Britain. Fair questions are around how the racing worked and the manner in which the winner was decided. On top of that, is hamster racing still a thing? It is likely that there is always someone somewhere that is busy racing something, but we are talking about the more officially organised races that you can watch.

The Origins of Hamster Racing

The United Kingdom has a long and storied tradition of racing horses. It is a practice that has existed for hundreds of years, with the country’s kings and queens engaging with the practice from time to time. On the back of the horse racing world came the betting industry, firstly thanks to on-course bookmakers and then, in 1961, with the introduction of high street bookmakers. The betting industry has long paid money into horse racing in order to ensure that the mutually beneficial arrangement has been able to carry on for generations.

Pause in Horse Racing Due to Foot-and-Mouth Outbreak

Anything that results in a pause in horse racing therefore causes panic not just for the owners, trainers and jockeys that work in the industry but also with the bookmakers who make so much money from it. When bookies aren’t making money, so too does the world of horse racing suffer as a consequence. With that in mind, the outbreak of foot-and-mouth disease in the UK back in 2001 causes a crisis in several industries, thanks to an outbreak of more than 2,000 cases in farms throughout the British countryside, which needed to be stamped out.

Provided an Alternative for Bettors

There were numerous decisions taken in order to try and stem the outbreak of foot-and-mouth, with the decision to cancel horse racing being one of the biggest ones. It was done in order to stop people moving around the country from largely rural areas, but it resulted in betting companies seeing a huge loss in their profits when the likes of the Cheltenham Festival was cancelled. An alternative needed to be found, which Blue Square thought that it had found, at least in terms of entertainment, thanks to its decision to launch a hamster racing competition.

The initial idea from Blue Square was to see hamsters racing in a series of qualifying races throughout the week before a final race took place on the Friday. The hope was that the qualifying races would give the betting company enough times to drum up some interest, with the final race theoretically pitching the best-of-the-best against one another. The qualifying series would see people become intrigued by what was happening, as well as learn a bit about the hamsters, with the final race giving them a chance to place bets. 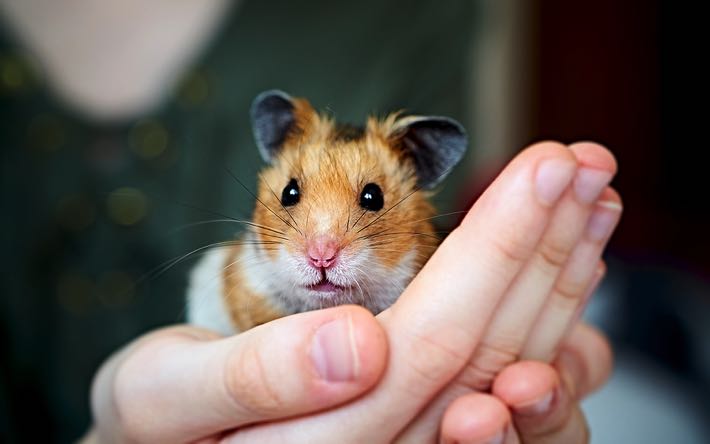 It is common for hamster racing to see the participants divided into two different categories: dwarf hamsters and Syrian hamsters. This divide goes along species lines, with other classifications also used from time to time. The likes of whether they are short-haired or long-haired hamsters matters, for example, as does whether they are patterned, as well as how much experience they have as racers. Once that has been decided, the hamsters are fitted into hamster wheels or hamster balls and placed on a track.

Usually hamster racing tracks are nine metres, or 30 foot, in length. That is considered to be the correct length of course for professional hamster racing, with the hamster that crosses the finish line the quickest declared the winner. When Blue Square ran the races, it asked for six hamsters to take place in each race, putting them in the wheels that were in the middle of dragster vehicles. As the hamster ran, the vehicle moved forward and the people watching at home discovered whether their bet had been well-placed or not.

Hamsters were able to complete the course in around 38 seconds, which is obviously quicker than most horse races but also significantly longer than the majority of greyhound racing events. People felt like they got some bang for their buck, therefore, though the events understandable proved to be less popular with bettors than the more traditional methods of wagering on animal races. The straight line of the course was seen by most as being less interesting than the sort of courses that dogs and horses tend to race on.

How Popular Was It?

Given the extent to which the United Kingdom is a nation that loves betting, you might imagine that people would jump on the chance to place wagers on something a little bit unusual. Blue Square confirmed at the time that they took about 300 to 350 bets on each of the hamster races during the qualifying period, which was much lower than the several thousand wagers that the company would take on its horse racing events. At the same time, a couple of thousand people logged on to the site to watch it race as it took place.

Racing in a small studio in North London, the hamster action was shown live on the company’s website. It also gained interest from media organisations, with the likes of the BBC and Sky News running video pieces about it. On top of that, newspapers like the Daily Mail published pieces explaining what the hamster racing was all about and why it was even taking place to begin with. That helped to drum up some more interest, but it still wasn’t enough to mean that Blue Square continued it as a regular feature, nor did Betfair revive it when they took over the company in 2013. 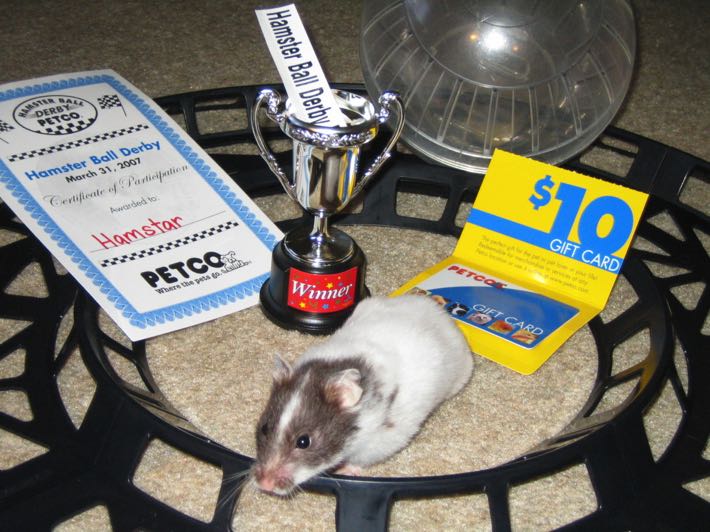 Though Blue Square was the first company to launch hamster racing in any meaningful sense, it wasn’t the only company that has tried to bring in customers thanks to setting the furry rodents against one another. In 2007, for instance, the American pet company, Petco, announced that it would re-introduce its biannual hamster races at its stores under the title of the Petco Hamster Ball Derby. When it had taken place in 2006, more than 14,000 hamsters and their owners had gone to Petco stores to take part in the events.

They were amateur in nature, using a non-standard course that was 2.4 metres, or eight foot, in length. The hamsters were also asked to race in standard spherical balls, rather than the dragster vehicles that Blue Square had used. The length of the track meant that races lasted a matter of seconds, with the prizes on offer being training equipment, hamster treats and Petco gift cards, rather than cash. It is also worth pointing out that, officially at least, bets were not placed on the races that took place at Petco stores.

A year before Petco’s decision to re-introduce the Petco Hamster Ball Derby, the music television station MTV decided to promote HamTrak ’06. This was a world tour of professional hamsters that had been sponsored by the likes of the radio station XFM and the MTV television show Pimp My Ride, among others. The first event took place at the Hammywood Hills Rodent Raceway on the 19th of May 2006, seeing Team Hot Rodent, sponsored by New Media Age, running out as the winner, thanks to the eight-month-old Michelle Schuhamster, a Syrian rodent enjoying her 24th career win.

An obvious question to ask is why, exactly, hamster racing hasn’t become more popular in the years that have passed since Blue Square first introduced it out of desperation back in 2001. There are numerous reasons for this, not least of which is the fact that it is much harder for punters to assess hamsters and their likely ability to win than it is for people to look at horses and greyhounds and get a good idea of how they will probably perform when the actual racing gets underway.

Unable to Assess the Participants

This ability to assess the participants is important for punters looking to take on bookmakers and know whether or not they’ve got their odds right. There is, after all, a reason why some people spend hours and days pouring over the form guide before selecting the horses that they’d like to bet on at the likes of the Grand National or the Cheltenham Festival. If punters can’t do the same thing with their hamster betting then they aren’t going to be as invested in it over the long-term as other animal races.

There is also the fact that it is difficult to issue handicaps in hamster racing events. Observing the likes of the speed, form and classification of a horse is important to correctly introduce a handicap and even that doesn’t always work as the handicappers might like. If it is tricky to do with horses, in spite of the huge amount of evidence available to the people doing the handicapping, then how much more difficult must it be to ensure that a hamster, which only runs when a race is available, has been handicapped successfully?

Those that watch and enjoy horse racing will often think that they can suss out what a horse’s handicap should be. As a result, it is common for bettors to think that they have figured out when the handicappers have made a mistake with a horse that they want to bet on and be able to take advantage of the associated value. When it comes to hamsters, however, few people know what would be looked for by the handicappers, let alone whether a mistake has been made in the assigning of a handicap value to the hamster concerned.

What this means in practical terms is that the large numbers of people who are keen horse bettors are unwilling to move over and bet on a market that they just don’t understand. Whilst plenty of people will always be willing to bet on things that are basically down to chance, the same cannot be said of those that spend hundreds of hours of their lives looking into the specifics of an event such as horse racing. Those bettors like to know what they’re betting on and why, if they end up losing their wager, they got it so wrong.

Perhaps in the years that follow, hamster racing will become popular. The more that the world of online betting develops, the more websites will look to bring in an audience by offering them something unique. At the time of writing, hamster racing is limited to fun amateur events rather than done in any sort of organised fashion. It is possible that that might change as sites explore the possibility of something that has worked in the past for a bookmaker, even if that bookie is not longer a going concern.