Elsewhere on this site you’ll be able to read about the curious world of goat racing. It is an odd thing that started off as a way of raising money in Tobago before spreading around the world. In the case of goat racing, the animal in question was chosen because they were more affordable than horses, which were typically reserved for the island. It is unlikely that the same can be said for Ostriches, which also differ from goats insomuch as they actually carry jockeys, rather than just have them run alongside them.

As you might imagine, that is a controversial aspect of ostrich racing, so in many places the jockeys no longer ride on the animals and instead they are asked to pull something with a harness. The sport originated in Africa and spread to other countries, with the United States of America being one of the most common. The birds can reach speeds of up to 43 miles per hour, so it is fair to say that it has the capacity to be quite a dangerous undertaking for those that would choose to physically ride on them. 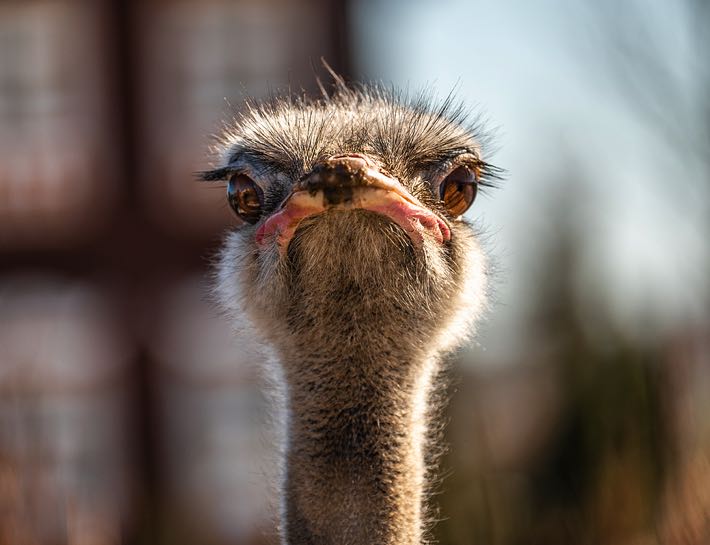 Before we discuss the finer details of the racing of ostriches, it is worth looking at the birds themselves. Native to Africa, it is the largest bird species that is still living today and is part of the order Struthioniformes. They tends to live in nomadic groups of between five and 50 birds, mainly eating plant matter, small reptiles and invertebrates. If an ostrich is threatened then it tends to either lie flat against the ground or else run away, with the latter being relevant to the racing of the bird, as we’ll discuss in more detail later on in the piece.

Ostriches are farmed around the world, mainly for its feathers, which are both decorative but are also used to make feather dusters. The skin of an ostrich can be used to make leather products, whilst its flesh is marketed commercially thanks to its lean quality. The farming is somewhat necessary, given the fact that the common ostrich population has declined markedly over the past 200 years. Interestingly, the idea that ostriches bury their heads in the sand is a myth, likely started by Pliny the Elder.

Somewhat unsurprisingly, common ostriches try to avoid humans in the wild, correctly identifying them as predators. They tend to run away if they’re approached, but they can be aggressive if they are attacked. If they feel that they need to defend their territories or their offspring then they will also turn violent. They boast long claws, which have the ability to disembowel a person with a single blow. Most attacks tend to take place in South Africa, particularly in an area where ostrich farms are set next to areas of feral and wild ostriches.

Given the propensity of ostriches to attack when they feel threatened, as well as the fact that they have claws that can disembowel a person, you might well wonder why, exactly, ostriches are used in racing. The answer is that people are generally quite stupid and are happy to put themselves at risk if it means that they get to be competitive with each other. The fact that ostriches are the largest bird in the world to be successfully ridden demonstrates this need that some people have to compete with one another.

Reaching as tall as 1.6 metres and weighing more than 130 kilometres, ostriches can take a maximum weight of around 86 kilograms. For this reason, the birds tend to only be ridden by children, with South African ostrich farms putting a maximum weight limit of 75 kilograms in place on riders. Given the fact that they can reach speeds of 43 miles per hour and maintain that speed over distance, it was perhaps inevitable that someone would want to ride them at some point. They run faster than horses, with only cheetahs able to run faster than them.

The history of racing ostriches dates back to 1890, when the practice was first carried out in Jacksonville in the US state of Florida. In actual fact, it is likely that the practice began in Africa, but the exact knowledge of this isn’t clear. It was certainly popularised in America, thanks to Jacksonville offering ostrich riding as a tourist attraction. When it comes to the racing of ostriches, they are either ridden or else asked to pull a wagon in which a jockey will stand or sit and attempt to direct them with the use of reigns.

The rules of ostrich racing are fairly simple. A jockey is asked to climb on the back of the bird and grab them by the feathers, riding them on a track. In instances where the riding of the ostrich directly is not allowed, a chariot, wagon or other form of vehicle is attached to the ostrich and the bird pulls it along as it runs. What sets it apart as a sport form other races is the fact that ostriches are not easy to control. They will commonly try to shake their rider off, usually leaving them on the floor if they are successful.

In the above video, you can see ostrich racing from Canterbury Park, which took place in 2016. The ostriches all have jockeys on their backs and begin the race inside a stall, being released at the beginning of the race and immediately hitting the track. The jockeys all have colours on them in the same way that jockeys do in horses races, whilst the ostriches have a number on the front of them so that the commentators, race organisers and spectators can tell which ostrich is which as the race progresses towards the finish.

Though one of the ostriches starts well, you soon see it begin to move over to the edge of the track and allowing another ostrich to make it past. Indeed, the originally leader throws its jockey of its back and then carries on running. Other jockeys also fall off as the race reaches its conclusion, with Kim Kardashin ending up victorious. The jockey on the original leader tries to stay on, holding onto the bird’s feathers in a way that looks extremely uncomfortable and painful for the bird; not that the commentator seems to care.

The practice of riding an ostrich directly is less common nowadays than it used to be. It is clear that if the person riding the ostrich is too heavy then they can cause the ostrich real damage, whilst the video of the ostrich racing at Canterbury Park in the United States of America offers a perfect demonstration of how holding onto the bird as a jockey starts to fall is likely to cause them a lot of pain. As it was realised that adults were too heavy to ride the birds, children were instead used to direct them on the course, which was controversial.

We mentioned earlier that ostriches tend to run when frightened. This fact is part of the reason why animal rights groups object to the sport of ostrich racing, given that the birds are likely only running because they are scared. Ostriches have never been bred to carry humans, unlike animals, such as camels and horses, so it is seen as a cruel to ride them for sport and the entertainment of others. The only concession to this that has been made, at Canterbury Park at least, is that people cannot place bets on the ostrich races. 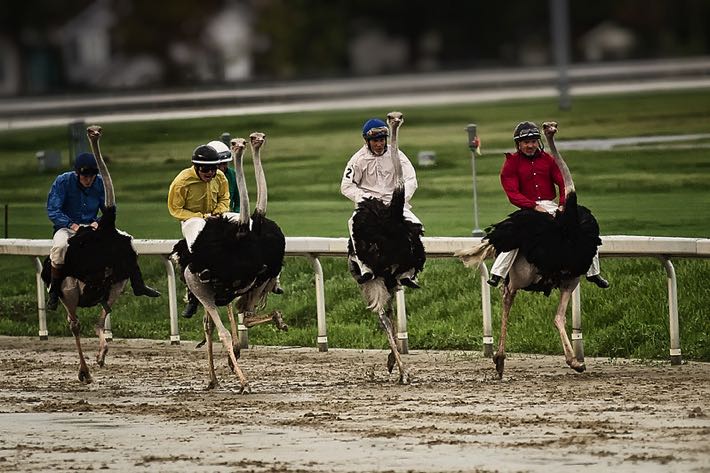 Though animal rights groups believe that the practice of ostrich racing is cruel, the same is true of horse racing and yet that still takes place all around the world. It is not all that surprising, therefore, that ostrich racing still occurs in numerous different locations. In truth, most of these are in the United States of America, so here is a quick look at some of the different places that play host to ostrich racing at different times in the year.

Located in New Orleans in the US state of Louisiana, Fair Grounds Race Course & Slots is something of a gambling Mecca in the local area. They host ‘exotic races’ every year, which involves more than just ostrich running. The likes of zebra races also take place, which perhaps gives you a sense of the sort of entertainment that you’re in for if you head there on Exotic Race Day. The company has as many as 15 off-track betting parlours in the state, whilst also running slot machines on-site.

The aforementioned Canterbury Park racing is part of the racecourse Extreme Race Day. Featuring racing of other animals like camels alongside the ostriches, the day also sees zebra racing taking place. It is all done at the track at Shakopee, in the state of Minnesota and the racing of the various ‘extreme animals’ takes place in between the more traditional activity of horse racing. As mentioned, you can’t bet on the ‘weirder’ races, but that doesn’t mean that unofficial bets aren’t taken by some disreputable folk.

Located in Henderson in the US state of Kentucky, Ellis Park Racing & Gaming is, as the name suggests, somewhere that you can go to watch racing, as well as play on slots on the like. Ostrich racing, which takes place alongside camel racing, has become something of an alternative to thoroughbred racing at the course. It takes place annually and is something of a recent addition to the track’s roster, but the crowds enjoy it so it is likely to be a long-term staple of Ellis Park if that is anything to go by.

If there is gambling to be had in the United States of America then it is a fairly safe bet (no pun intended) that Nevada will get in on the act sooner or later. In the case of ostrich racing, that takes place in Virginia City. The International Camel and Ostrich Race Day started as a joke between newspaper editors more than 60 years ago, but it has gone on to become one of the most popular events in Virginia City and so shows no sign of abating any time soon. It is something of a family day out, which is something you can decide for yourself whether it’s appropriate or not.

If you think ostrich racing on its own doesn’t show enough respect to the animal in question, you might want to head to the state of Arizona. There you’ll be able to go to the Chandler Ostrich Festival, which is about so much more than just racing. It is a community event aimed at the whole family, with ostrich-themed activities taking place throughout the day. Obviously one of those is indeed ostrich racing, but you can also enjoy some regional entertainment and upscale arts and crafts, as well as a parade in which ostriches feature heavily.